Granted, there are a number of things about this code that strikes me, but one thing hit me immediately: all the columns are nullable.  That tells me that there are no primary keys defined.  I checked the other CREATE TABLE statements in the code as well; likewise, all of them had all their columns set to be nullable.

(There are some other things about the CREATE TABLE statements that struck me as well, but I’ll save those topics for another time.  For the purposes of this article, I’ll concentrate on primary keys.)

First, if you’re getting your feet wet with relational databases, it behooves the question…

What is a primary key?

First, I’ll start with a few links that help explain this:

A primary key uniquely identifies a row of data.  To illustrate this, here’s an example.

Let’s say we have a person named John Smith taking night classes at State University.  In his database file (which, for the purposes of this example, has his name and address), he has the following information:

Now, let’s say his son, John Smith Jr. (who lives at the same address) enrolls at State University (for the purposes of this example, let’s assume the database doesn’t allow suffixes like “Jr.”).  He is entered in the database.  So now, you have this.

How do you know which record is which?  Answer: you don’t.  So, let’s add an ID column to our table.

Now we know that we have two different records for two different people who are both named John Smith who live at 123 Main Street.

Granted, this is an overly-simplistic example, but the point is that the ID column — which is always unique and is never NULL — uniquely identifies each row.

So now that we know what a primary key is, let’s go back to our baseball database.

We could create an ID column for our baseball tables, but I don’t want to do that here.  Instead, I want to make use of existing columns for our primary keys.  I’ll start with the MASTER table, which keeps track of ballplayers.

I ran a simple SELECT * FROM MASTER to get an idea of what’s in the table.  Running the query gave me this. 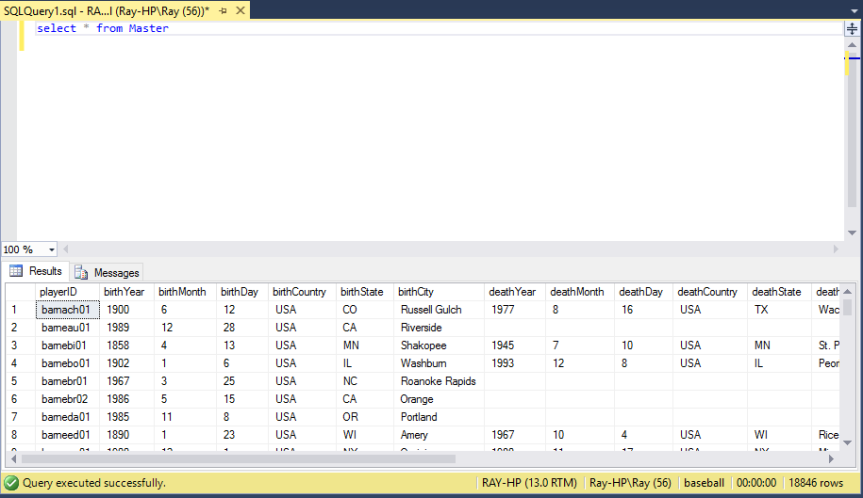 I noted a couple of things.  First, I see a column called “playerID” which could be unique and used as a primary key.  Second, I see that the table contains 18,846 rows.  So can I use “playerID” for my primary key?  Let’s find out.

I ran two query statements.  The first gives me a count of unique entries I have for “playerID.”  The second tells me if any NULL values for “playerID” exist.

Here’s what I got.

The first statement returns 18,846, which matches the number of rows in my earlier query, telling me that all values are unique.  The second statement doesn’t return anything, which tells me that there are no NULL values for “playerID.”  Therefore, the “playerID” column can be used as the primary key for this table.

So how do we make this column the primary key?  There are a couple of ways to do it in SQL Server.  For this, I decided to use T-SQL.

When I ran this, it returned an error.

Okay.  Why did this appear?  Keep in mind that a primary key cannot be null.  When our code created our tables, it made them all nullable.  So we need to add a NOT NULL constraint before we create the primary key.

Running this statement sets the column to not allow NULL values.  Once I ran this, I re-ran the command to create the primary key, and it completed successfully.  So I now have a primary key on my Master table.

What if I don’t have a single unique column?

Let’s take a look at the Batting table.

We find that the Batting table contains 101,332 rows, so we need a combination of columns that will give us 101,332 unique results.  I figured that playerID, yearID, and stint should give us those results.

I ran the following query.

This returned 101,332 results.  Indeed, I seem to have identified my composite primary key.

My first task is to set these three columns to not accept NULL values (otherwise, we’d get the same error from earlier).

Once the NOT NULL constraint is in place, we can create our composite primary key.  Note that in my T-SQL statement below, I provide three columns (playerID, yearID, stint), not just one.

The query ran successfully.  We now have a composite primary key on the Batting table that uses three columns.

Hopefully, this gives you a good introduction to primary keys on database tables.  In upcoming articles, I’ll cover other aspects such as foreign keys, indexes, and data types as we continue to further refine and improve our baseball database.

I will be speaking!  I will be giving my presentation, “Whacha just say?  Talking technology to non-technical people.”

It’s going to be a great day of sessions (free training!) and networking.  If you’re interested in SQL Server, come check us out!

Hope to see you there!